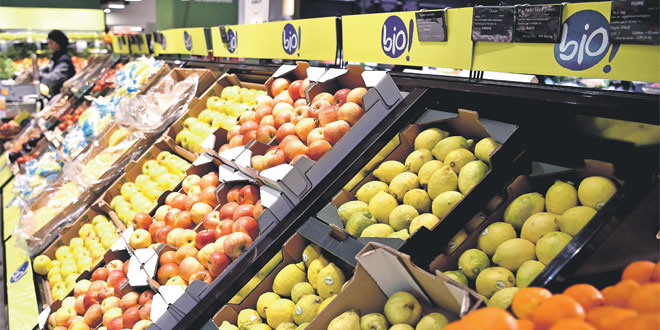 Morocco produces a diverse range of organic agricultural products consisting of fruits and vegetables. At the moment, it exports about 7,000 tons. On the local market, meat, dairy products and fish produced organically are also sold (Ph. AFP) (Ph. AFP)

Other times, other customs. To consume healthy is the credo which forces from now on the food habits. A concept carried, obviously, by the organic farming. And the craze that it arouses everywhere in the world is without common measure: The market is estimated at several hundred billion dollars with an annual progression in two figures.

Morocco does not escape the trend. All things considered, the country has developed a very diversified organic production sector: vegetable crops, olive trees, citrus fruits, pomegranate, avocado, cereals, legumes, mint, aromatic and medicinal plants. The list also includes meats (red and white), honey and dairy products. But it is not yet the cruising speed.

The areas currently cultivated in organic farming are estimated at 7,400 ha for a production of about 75,000 tons of which 12,000 are exported on average. These figures reflect a great breakthrough since production has doubled in less than 5 years and the local market now consumes more than 60,000 tons. Several signs have opened in the main cities of the Kingdom and direct distribution is active throughout the years.

Every week, operators offer baskets of fruit and vegetables weighing 10 to 15 kilos at prices ranging from 150 to 200 DH depending on the weight. Prices that can increase by a third or more with the addition of meat or cheese. The only drawback is that the prices are considered too high in relation to the purchasing power of Moroccans.

A ratio of simple to triple or more. But for professionals, the prices charged are fully justified. First, the organic production method results in yields reduced by half compared to conventional agriculture, without the use of chemical fertilizers. Secondly, the cost of certification and the time required to convert land result in both additional costs and a loss of income.

Today, the professionals want to move forward. With the key to mobilize their inter-profession for the implementation of the contract-program signed with the government, more than six years ago. The only Moroccan Association of the organic production sector (Amabio) has joined the other two professions, one operating in the development, the other in the export. This has led to the creation of the Moroccan Interprofessional Federation of Organic (Fimabio).

The contract-program signed with the government gives pride of place to investment in certification. The same interest is given to export and R&D

The objective is to exploit at least part of the enormous potential of the country. The profession estimates the areas to be converted into organic production of about 625,000 ha. This is the case of crops and spontaneous plants but also thousands of micro-farms that practice natural agriculture, lacking the means to afford inputs and chemicals for plant protection. « A large source of production and income for small farmers, » say professionals.

For the moment, the interprofession considers that there are two levers of growth that must be put to work. Firstly, the certification of areas currently managed in organic mode but which are not certified. The reason is that the cost is too high for small producers.

The contract-program estimates it at 381 million DH to reach a total certified area of 40,000 ha by 2020. They must contribute 256 million DH. The rest is borne by the State. The other lever is the conversion of conventional productions that are easy to succeed technically and for which there is a commercial interest.

According to the interprofession, « the expected socio-economic impact is very significant, particularly in terms of improving the income of farmers and exports. The targeted objectives are summarized in the realization of 400,000 tons in plant production and 8,500 of animal products.

This would allow the creation of 35,000 jobs and the export of 60,000 tons for a turnover of 800 million DH. The interprofession thus bets much more on the local consumption of organic products.

Organic agriculture is a method of production and processing that respects the environment, animal welfare and biodiversity. Organic food is produced from ingredients without synthetic chemicals and without GMO (genetically modified organism). They do not contain any taste additives, colorants or synthetic chemical flavors.

Organic farming is based on respect for animal welfare. The animals must have access to the open air and space. They are fed with organic food mainly from the farm and are treated primarily with alternative medicines. The basic principles remain certification and control.

THE ORGANIC PRODUCTION SECTOR IN MOROCCO IS BEING RESTRUCTURED

THE ORGANIC MARKET CONTINUES TO GROW