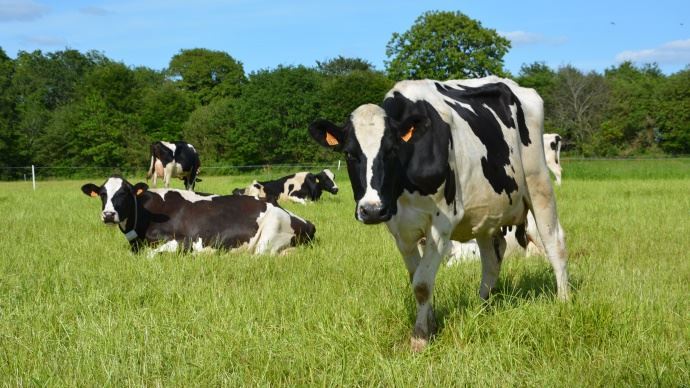 Increasing food autonomy and adapting breeding practices to forage resources are the main ways to improve resilience on organic dairy farms. These approaches should also serve as a basis for reflection for all cattle farms.

Resilience is the ability of a farm to withstand shocks such as climatic or economic events. While not all farms are exposed to the same risks, particularly weather-related, their organization affects their sensitivity to hazards and their ability to recover when they occur.

To get through the turbulence, whether economic or climatic, it is better to travel light, by reducing operational costs. Because in the construction of the economic result, « the economic and climatic context is less discriminating than the breeding practices », notes Niels Bize, from the Frab, the regional federation of organic agriculture in Brittany, who has followed Breton farms in conversion.

The first key factor to gain economic efficiency is to reduce costs, especially by increasing the proportion of grass grazed. On 227 organic farms monitored by the Institut de l’élevage over a period of 15 years, grazing represents 57% of the annual ration. « This is reflected in the ratio of operating expenses to income, which is 21% in organic farming compared to 38% in conventional farming, » says Jérôme Pavie. Conversely, when structural costs increase, resilience decreases. Even more than the place of grazing, it is « food autonomy that gives a better chance of getting through the difficulties, » says Loïc Madeline, from the Institut de l’élevage. To increase the food autonomy of his herd, it is necessary to play on several levels: diversity of the crop rotation (permanent and temporary grasslands, planted varieties), early grazing, dual purpose crops (for example cereals that can be ensiled in case of lack of fodder), and to make the most of intercultures.

In a livestock farm, especially in organic farming, the cost of food weighs heavily in the economic balance. To minimize the consequences in case of unforeseen events, it is necessary to consider, more or less punctually, reducing its needs: reducing the renewal rate, switching to monotraite, anticipating culls. « The number of cows must be adjusted to the resources, for example when choosing the calving period, » says Loïc Madeline.

If resilience relies heavily on the use of pasture, how can it be increased when accessible surfaces are a hindrance? We can organize ourselves to graze further away, » encourages Niels Bize. Green feeding can be a solution, but you have to take into account its cost and the work required. In the longer term, it is necessary to seize opportunities for parcel exchanges.

Two other factors obviously play a role in the resilience of farms, but farmers do not have complete control over them. Maximizing products can of course improve the situation of a farm. Hence the choice of organic, with a milk price of 446 €/1,000 liters in 2017 against 331 in conventional. « But beware, farms that start their conversion with economic difficulties increase their vulnerability during this period, « warns Niels Bize.

The last factor that affects resilience is the weight of public aid. There is no more public aid in organic farming (19% of gross product) than in conventional farming (18%). Independence from subsidies is more related to the stocking rate and the share of corn in the SFP.