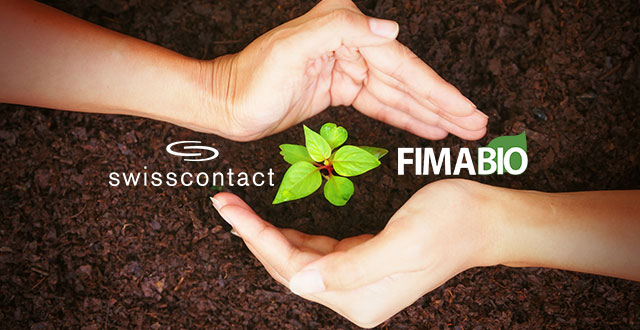 Swisscontact is an independent, private-sector foundation for international development cooperation. It has more than 1400 employees in 36 countries and has been promoting economic, social and ecological development since 1959.

Through 3 pilot units targeting different products (market gardening in Ben Slimane, olives in Meknes, polyculture in Rhafsai), FIMABIO has raised awareness of organic farming among 285 farmers and has continued in-depth training with 131 of them. About ten farmers in each of the three regions have already initiated the conversion process. In addition, the pilot units have been able to establish partnerships with regional institutions aimed at expanding organic practices, relying on the converted farmers as a hard core (the case of the pilot olive farm, PAM in Meknes with the DRA and the Fes-Mkenès regional council for the development of organic). Partnerships focused on research and development between ENAM/IAV and the 3 pilot units have also been established.

The 3 pilot units being a pilot experience, FIMABIO's ambition was to extend the principle to the whole national territory, which requires important funds and investments. The support of Swisscontact has allowed the realization of a strategic plan and a fundraising plan that will allow continuity and financial resources to carry out the missions outlined. Workshops for each college and meetings with actors at the international level have allowed FIMABIO to clarify its strategic vision and to engage in advocacy activities, in order to position itself as a key player in the defense of the interests of organic operators.

Program contract between fimabio & the state

Very good news for all farmers who want to convert their production. The certification subsidy is now available.